This complex, consisting of three conference rooms and a hall, is on the modernized third floor of the castle (the Conference-Cultural Centre) and may fit, together, up to 300 people in a theatre-type arrangement. The innovative audio-visual system that has been installed allows for one or more presentations to take place at a time. The four adjacent rooms may, according to need, be used independently or as a whole.

This arrangement allows our customers to organize parallel conferences and training sessions, dividing participants into groups working separately, presenting lectures on various subjects, and so on. It is worth noting that each room has its separate entrance, while there are passageways between the rooms. The area is often used for prestigious conferences,  where participants have comfortable conditions in which to hear speakers, in rooms suited for 60 people (unlike too many rooms at other facilities, built for 300, where every murmur can be heard). The hall of the Hans Heinrich rooms is especially suitable for coffee breaks, lunches or standing buffets.

The modern Hans Heinrich rooms are, without question, of good value. The audio-visual system is managed with the help of a portable tablet and wireless technology. Another significant feature is a camera which can broadcast the speaker’s presentation in real time to other rooms being used in the area. In each room there are permanent screens which, when not in use, may function as decorative wall pictures. Of course, as a European-standard facility, it provides every room with a wireless connection to high-speed internet. As part of the rental agreement, we offer cordless microphones and laptops, upon request.

An undeniable architectural attribute of the third floor of Książ Castle is its remarkably spacious bathrooms,  with stunning arrangements that are  reminiscent of the times of the Hochbergs.

In History:  Members of the wealthy Hochberg family lived on the third floor, which they considered the most beautiful and comfortable. Hans Heinrich XV, the castle’s last master, prepared these rooms in 1935 as an apartment for Princess Daisy, who was to return to Książ from Munich. He chose them, no doubt, especially for the wonderful and extensive view from its windows, including a full view of the castle (from top to bottom), as well as the so-called Giant Rock, which features in a most interesting legend. 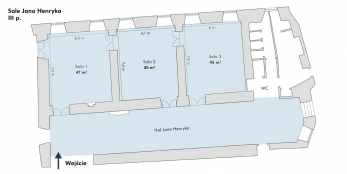