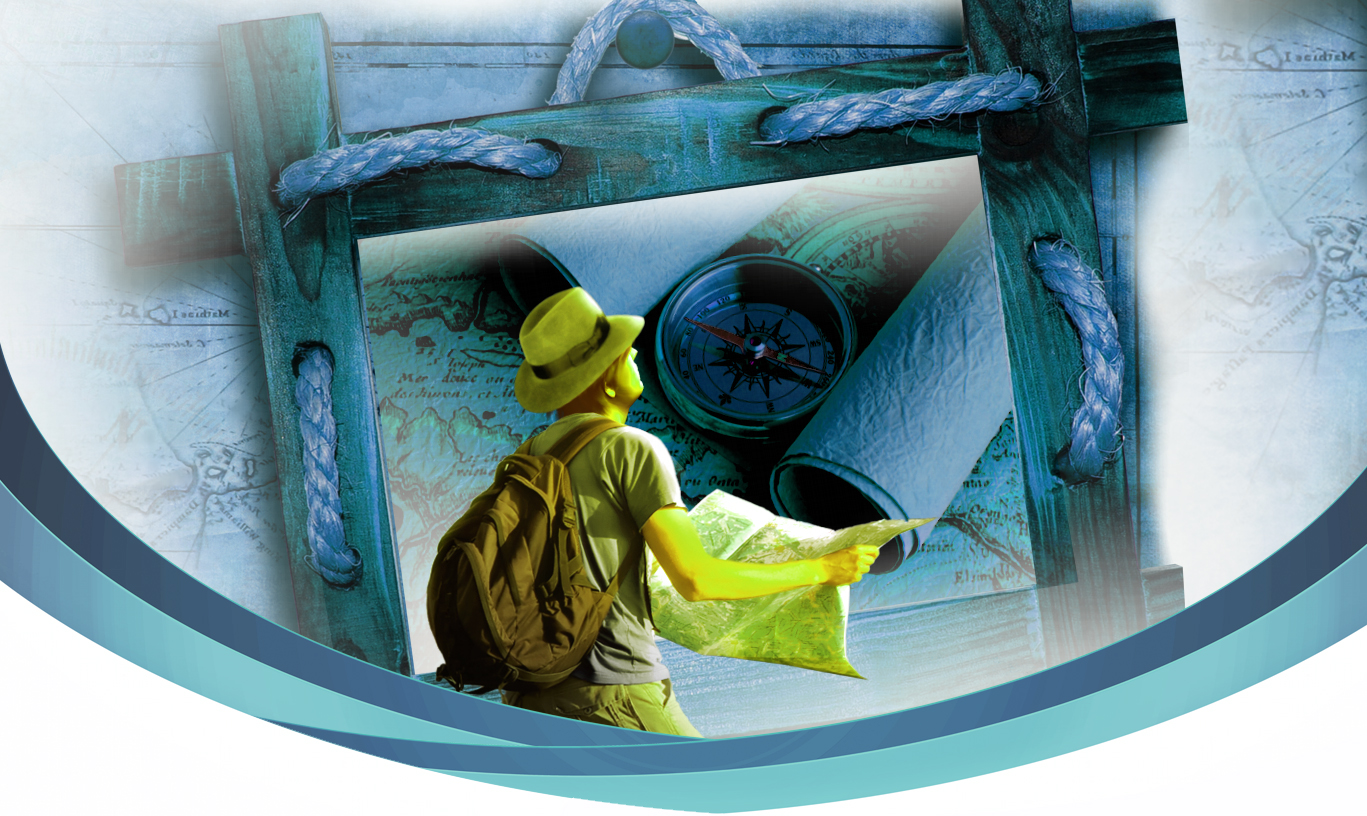 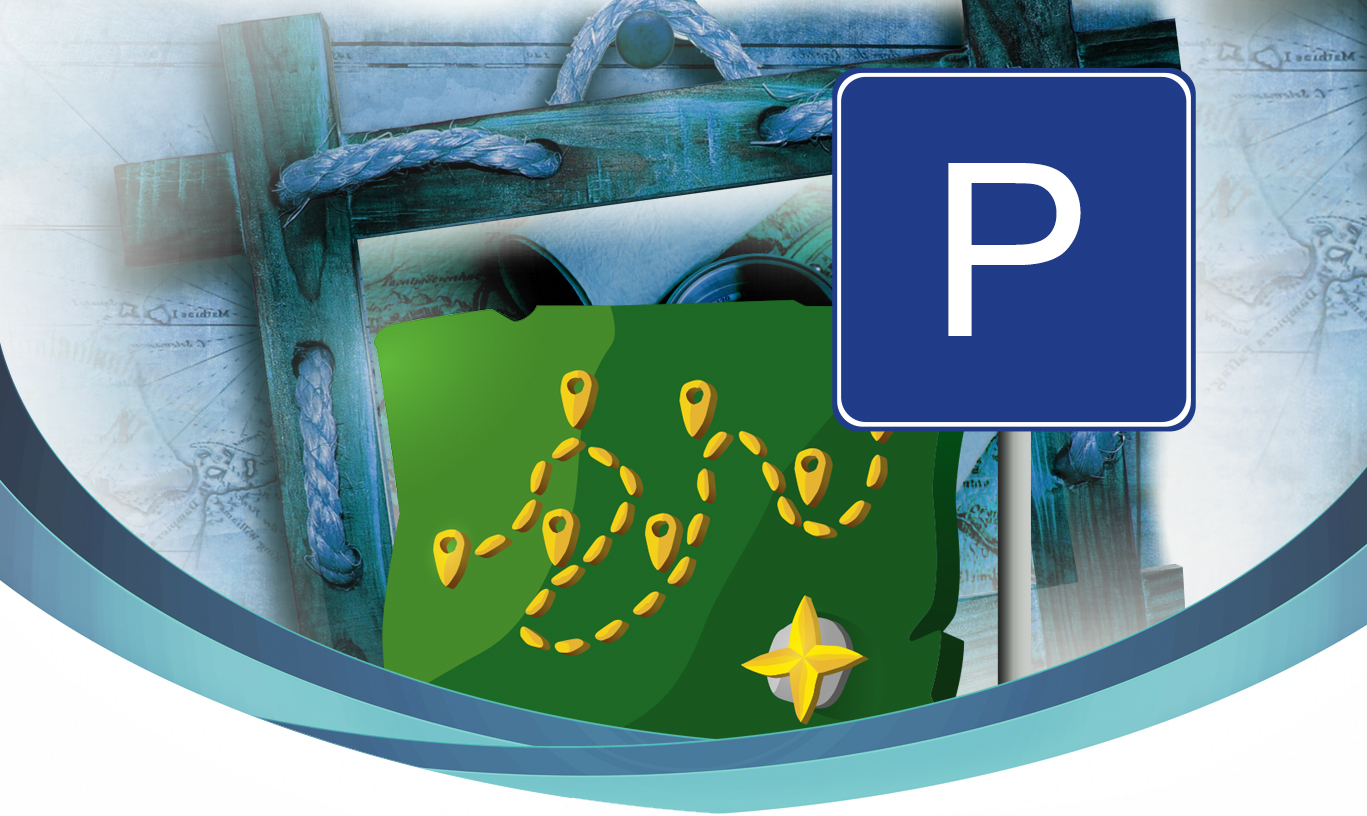 The Lower Silesia Festival of Secrets at Książ Castle

Welcome to Poland’s largest gathering of treasure hunters, history lovers and others who enjoy probing the secrets of the past. The Lower Silesia Festival of Secrets – already the seventh edition – promises to be a true voyage in time and space, reconstructing daily life in past ages. Take in the “Battle of the Ages”, presenting a variety of historic military formations. Fall in love with the Renaissance as you view “Leonardo da Vinci’s Machines”, a unique exhibition of several dozen of his inventions, presented in the Castle’s largest complex of rooms. Thrill to the “Crime and Medicine” exhibition, presenting a collection of anatomical preparations, weapons and tools of evil deeds. As in past years, there will be something for everyone with a taste for adventure: a wealth of pageants and displays, field games, special attractions for families with children, and  opportunities to travel to a historical visual world. Above all, you can take part in serious and searching discussions of various historical issues, following lectures that touch on particularly interesting and unexplained past events.

Please be informed that the Lower Silesia Festival of Mystery will take place on 10 and 11 August, 2019 (Saturday and Sunday) in Książ Castle, including the bailey area in front of the castle along with its courtyard and terraces. In consequence, on these dates the castle ticket office will be situated in the front of the castle gate building, and entrance to the castle grounds will require an admission ticket.

The castle online purchase system may be found at: bilety.ksiaz.walbrzych.pl (please go to the Festival of Mystery 2019) and in ticket office located in front of the castle gate building.

Prepare for the next Festival of Secrets! Over 16,000 visitors will view museum exhibits from all over Poland and hear archaeologists and accomplished travellers – all in one of Poland’s largest and most enigmatic castles. What does the Festival’s 7th edition hold in store for us?

Festival tickets provide access to the following attractions -- in the Ballroom Complex, inside the Castle:

LEONARDO DA VINCI’S MACHINES: the year 2019, 500 years after Leonardo da Vinci’s death, has been proclaimed as a year of celebration of the life and times of one of the Renaissance’s greatest figures. Discover da Vinci’s secret sketches and amazing machines, ahead of their time. The helicopter, automobile, ball bearing, parachute and tank were only some of his numerous creations. Several dozen of the master’s remarkable inventions have been brought to the largest of the Castle’s spaces during this year’s Festival of Secrets. 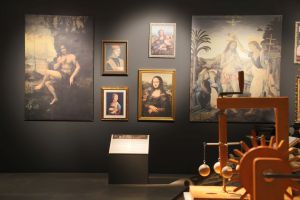 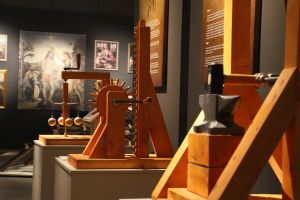 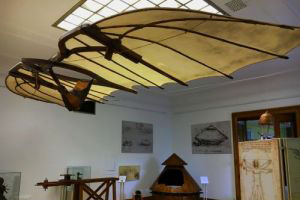 - Festival tickets provide access to the following attraction
- in the Hans Heinrich Rooms, third floor, inside the Castle:

„BATTLE OF THE AGES”  -- Soldiers from ten historical periods will gather in one time and place for a life-and-death struggle never seen before! This historical spectacle will show not only how weapons and battle tactics have changed over the course of some two thousand years, but also how the development of military technology has influenced the fate of civilization. The battles will unfold dramatically against a background of a fountain spewing fire into the sky. Between each show, armies from different periods of history will be presented. Representatives of each will talk about the unique qualities of the formations they are depicting, explaining fully what accounts for their place in the history of the world’s armed forces.

-Festival tickets provide access to the following attraction
- in the Imperial Rooms (Sale Cesarskie), inside the Castle:

CRIME AND MEDICINE – for the first time ever, the Department of Forensic Medicine at Wroclaw’s Medical University presents its extensive collection of anatomical preparations, weapons and tools of evil deeds. Here you’ll take in unique exhibition items, linked to stories of blood-curdling crimes. Agata Thannhauser and Dr. Łukasz Szleszkowski, both on the Forensic Medicine staff, will tell these tales as they guide you through the exhibit.

Visitor groups will be assembled continuously outside the Imperial Rooms on the first floor. The visit takes about 35 minutes. The number of places in each group is limited.

Admission to the exhibition is for adults only. 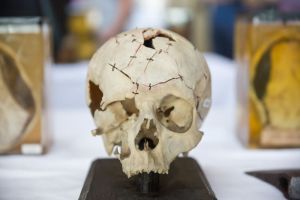 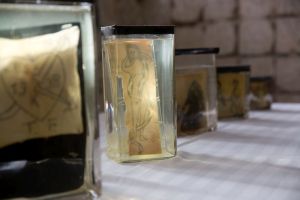 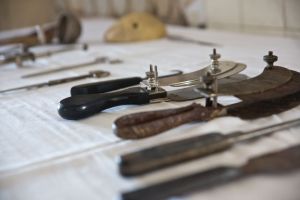 There’s no end of interesting activities at the Festival of Secrets. Aware of the energy of our youngest visitors, we have prepared a variety of events especially for them:
August 10 and 11, for families with children:

Prince Heinrich’s Castle –  at Książ, children experience the royal touch. Here is where every valiant knight can learn military crafts. Squires from Prince Heinrich’s court will take them to be specially trained in painting shields, sword fighting

and games from the Middle Ages.
All-day attractions. Place: in front of the Castle (the area near the courtyard)

Reach for the stars – those with families may take children to a different world in a special zone in the Castle hall. Magic will be brought to life as they hear extraordinary stories, and have their own fortunes told. Take your youngest companions to a true journey to the stars!
All-day activities in the Children’s Rooms, third floor (the Castle interior:

Discover the secrets of the Karkonosze Mountains – active workshops for children, in a specially arranged space on the Castle’s third floor.
All-day activities in the Children’s Rooms, third floor (the Castle interior):

Field Game: "Secrets of Princess Daisy’s garden”—whoever enters the Castle gardens will always leave a small piece of their heart behind. Their charm, arrangements and wealth of conceptions are fascinating to everyone. This is also an exceptional area for games. The Lower Silesia provincial government invites active families with children to a true escapade in nature, full of mysteries to solve and hidden treasures.
The fun takes place from 1 to 4 p.m. on the Terrace of the Goddess Flora (yellow tent, marked UMWD). 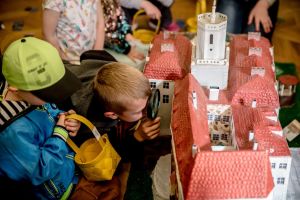 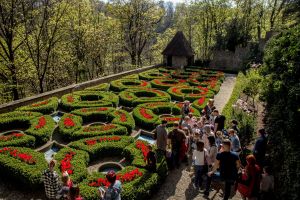 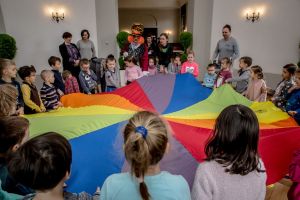 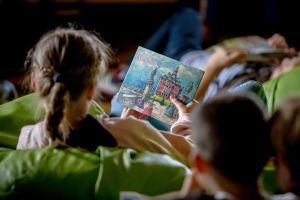 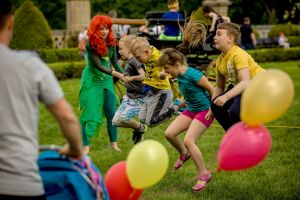 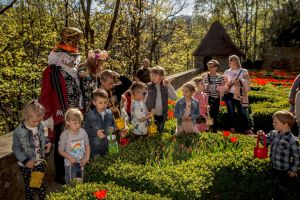 - Admission, only for those who hold Festival tickets, requires payment of a supplementary charge (5 zl./person). Groups gather at the main entrance to the Castle building.

Castle visits – especially for our visitors who wish a guided tour of the Castle, we have prepared a special visitor route, presenting the most beautiful Baroque rooms and the oldest Renaissance-era section of the Castle, still marked by traces of Second-World-War rebuilding activity. Guides will be dressed in unusual period costumes.
Visiting time: 40 minutes.
The tour, only for those who already have Festival tickets, requires a supplementary payment (5 zl./person). This may be purchased through the online system (address: www.bilety.ksiaz.walbrzych.pl; go to Wybierz wydarzenie [“Choose event”] and select “Guided Tour: English Language”), or at the ticket office during the Castle’s opening times. Select the date and time of the visit when purchasing the supplement. Please note that the number of places in each group is limited. 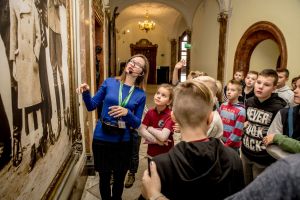 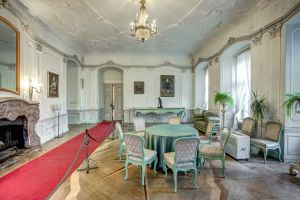 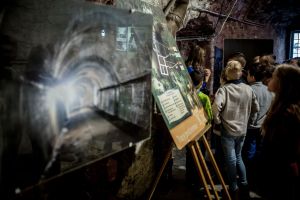 Festival tickets provide for admission to the following event in the Hans Heinrich Rooms (Castle interior):

“MS Piłsudski – a hidden history” – a virtual cruise on Poland’s most splendid trans-Atlantic liner! The Lower Silesia Festival of Secrets, in co-operation with the “Koncept Kultura” (Culture Concept) Foundation, invites visitors on a virtual voyage on board the most magnificent trans-Atlantic liner in the Polish fleet, the MS Pilsudski. Virtual-reality technology will take viewers on an unforgettable voyage across the Atlantic, all the while immersed in the rarefied world of its elegant interior, hearing stories about the ship which was the pride of the interwar Polish Republic. Visitors will stand face to face with the leading figures of the Poland of those days: Józef Piłsudski and Ignacy Jan Paderewski..

MS Piłsudski was the pride of Poland, the reborn Republic’s ambassador on the world’s seas and oceans. Unfortunately, like the legendary Titanic, it sank tragically at the height of its fame, after hitting a German mine. The wreck rests today at the bottom of the North Sea, not far from Flamborough Head.

This remarkable display begins at the bottom of the North Sea, where participants take part in a mission to carry out research on the wreck of the Pilsudski. There, taken back in time to a world generated by 3D virtual reality, they will bear witness to events from Polish history: the loss of its independence in the late 1700s, the regaining of independence in 1918, and finally the experience of a trans-Atlantic voyage on Poland’s most beautiful liner and the pride of the Second Polish Republic, the motorized ship Pilsudski.

- A maximum of ten persons may take part at a time in this experience, on a rotary basis: when one participant has finished, the next in line will take this person’s place;

- the virtual voyage takes about 15 minutes 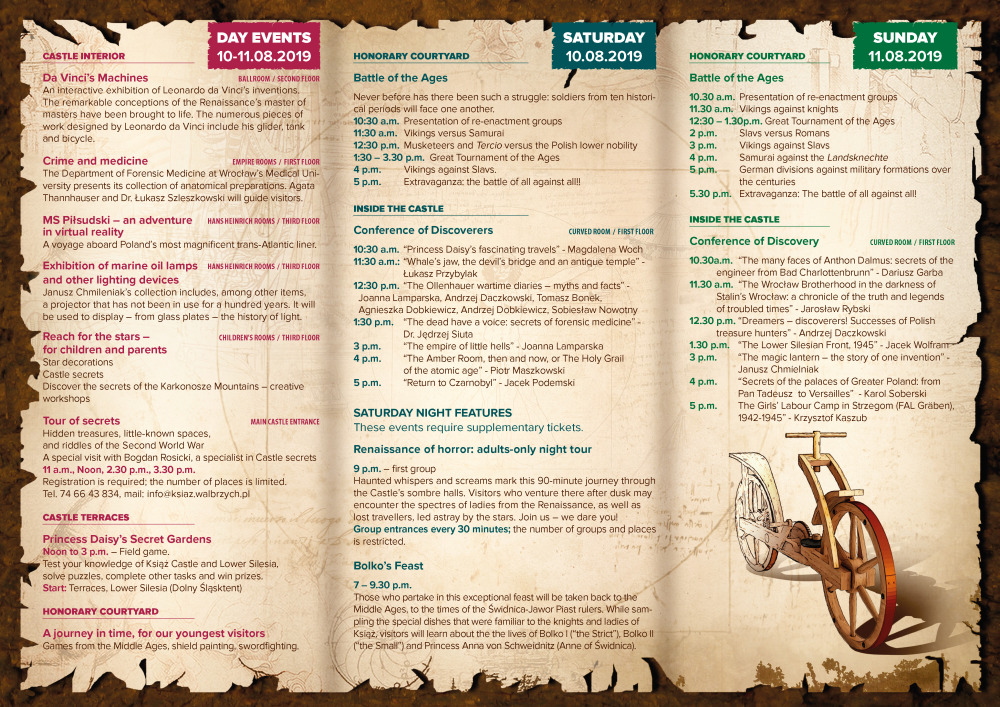 Are you planning to come to the 7th Lower Silesian Festival of Secrets and wondering how to reach us or where to park? Information, both for those who use public means of transport and for those who prefer to come in their own vehicle can be found [here]. We would also like to inform that due to the stands located in the outer bailey, the car park located directly in front of the Gate Building is closed.