All those familiar with the history of Książ Castle are certainly aware that the building has often changed hands. It was often rebuilt according to the visions of successive owners, and destroyed during the wars that rolled over Silesia. None of these historic maelstroms was, however, as devastating as that which totalitarianism, first Hitler’s and then Stalin’s, brought to the area. Following the Second World War, little that was valuable remained in the castle. That which somehow survived was plundered in the following years, when only looters took an interest in Książ.

Although the building’s imposing size and form have always held a great deal of charm, its interior, abandoned after the world wars, has called us to reflect upon the castle’s bygone wealth. The Hochbergs, its masters for over 400 years, gathered a collection of books that numbered over 64 thousand, as well as various artistic works. Książ was, after all, to be “the Silesian Helicon, where art and learning flourish” (Beata Lejma, Metamorfozy Zamku Książ). So it became once again, in July, 2015.

The “Metamorphoses of Książ Castle” exhibit is the joint initiative of the National Museum in Wrocław and Książ Castle in Wałbrzych. It has allowed, after 70 years, works that once graced the castle’s rooms to return to the former seat of the Piast and Hochberg dynasties. This undertaking has been recognized as a “precedent” in our country, as up to 40 works of art from the collections of the National Museum in Wrocław may be found in the castle chambers. Among the works exhibited, ten are from the former Hochberg collection, four are eighteenth-century portraits of members of the dynasty, and others mark the place of the castle’s owners in the dramatic panorama of Silesia’s history.

The opening of the exhibition, on 11 July 2015, has been recognized as the most important event in the post-war history of Książ Castle.

The present exhibition, “The Metamorphoses of Książ Castle,” may be viewed by taking the Baroque and Central routes. The wealth of presented works, their arrangement and their superb description reveal the castle not only as a place rich in architectural attributes, but also with a special soul, where various artistic concepts have intertwined with scientific and philosophical thought. Come along on this remarkable voyage to discover the castle and its exhibition.
PLEASE NOTE:  All tickets bought for visiting Książ Castle include admission to a temporary “The Metamorphoses of Książ Castle” exhibition (this provision does not apply to tickets purchased for special attractions like Książ by night).

The Baroque route, also known as the Welcome Route, acquaints visitors with the castle’s representative rooms. Why do lions guard the entrance to the Honorary Courtyard, and why are the figures of Apollo and Diana displayed on pedestals? What is depicted on the stone figures that are found on the edges of the battlements, and what do these scenes mean? Discovering the meanings embedded in these works of art, we learn how important it was to Konrad Ernst Maximilian von Hochberg to make transformative changes when he had the castle rebuilt in the Baroque style. It was during this time, in the years 1722 – 1732, that three wings of the Piast tower were added, including the east wing which was given an elegant façade, preceded by the legendary Honorary Courtyard. Inspired by Ovid’s Metamorphoses (from which the exhibition draws its name), Hochberg caused a remarkable symbolic meaning to resonate in Książ’s rooms; a visit to this part of the exhibition thus abounds with this beautiful mythological history, and anecdotes that are not only entertaining but also  instructive.

The Baroque Route passes through:

The Room of Metamorphoses, where we may view works from the collection of the castle’s last owner, Hans Heinrich XV, the husband of the legendary Princess Daisy;
The Green Salon, in which portraits of the von Hochberg dynasty are hung;
The Maximilian Hall, the best-preserved representative palace room in Silesia, considered a pearl not only for its superb reliefs, marbling and gilding, but especially for Felix Anton Scheffler’s ceiling work, depicting Athena’s visit to the muses on Mt. Helicon;
The White Salon, decorated with works that marked the lifestyle of the Hochbergs;
The Oriental Room, which has been changed for this exhibition to become Książ’s window on the world;
The Games Room, with decorations linked to the entertainments of the former aristocracy, but also important now for the castle’s role in providing education through play and art;
The Italian Salon, whose name and atmosphere recall the fascination that the Hochberg dynasty had for Italy.

The Middle Route  is found in the oldest, medieval-Renaissance part of the castle. The “Hall of Fame” in the Konrad Room shows how Książ’s history has been woven into the history of Europe, and of the international relations that prevailed there. Visitors may look powerful figures in the eye – representatives of dynasties who influenced the history of Silesia, and indeed of Europe.

Although the Middle Route also includes the Hunters’ Hall and the adjacent interior Black Courtyard, as well as the Knights’ Hall, it is in the Konrad's Hall where the magnificent works of the National Museum in Wrocław have been gathered. As part of the “Metamorphoses of Książ Castle” exhibition, a “Hall of Fame” has been created here, evoking the traditions of the Holy Roman Empire as well as the legends of the founders of the  Přemyslid, Piast, Habsburg and Hohenzollern dynasties. For there is no way to get to know the history of Książ, or of the von Hochberg family which ruled it, in isolation from the place of the castle and the region in the world of those times. 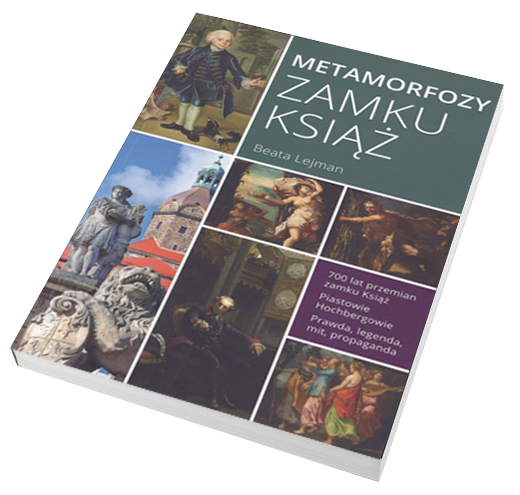 More information on the exhibition, as well as its routes, may be found in the publication titled “The Metamorphoses of Książ Castle” (english version is available) by Dr. Beata Lejman, curator of the National Museum in Wrocław, and of the exhibition. The book is available at the castle, as well as at on the online shop.