A Gourmet’s View of Książ

From February 14, the lost world of the von Hochberg family will open itself to visitors to Książ. About 200 unique photographs wil be shown on exhibition "A Gourmet’s View of Książ".

From February 14, the lost world of the von Hochberg family will open itself to visitors to Książ. They will discover a Castle that was once a residence graced by works of art, surrounded by gardens in bloom, and cared for by over 300 servants. This Książ,  lost after the First and Second World War, has come to life again in the exhibition, “A Gourmet’s View of Książ.”

During and after the wars, the Castle was destroyed and plundered. So it is all the more fascinating to glimpse what it was like in the times when one of Silesia’s most powerful and wealthiest dynasties ruled it. Guides to Książ have had no end of stories of this majestic castle, and of the crowned heads of Europe who visited it. Until now, however, they were only stories.

This is about to change: as of February 14, 2017, visitors will not only hear of Książ’s greatness, but see it in the old photographs of none other than Louis Hardouin, chef of the Hochberg court from 1909 to 1926.

A master of the culinary arts, Mr. Hardouin also had a remarkable passion for photography, to which we owe this collection: both a record of the daily life of his surroundings, and a gift to posterity. As one of the Hochberg court’s most interesting and eminent figures, he not only took part in Court life; he also helped create it. As Beata Lejman notes in her description of the exhibition: “There are images of the massive Castle proudly ensconced in its verdant surroundings, and pictures of the Castle’s aristocratic owners and their staff. Hardouin’s camera captured Ksiaż’s landscapes in every season of the year, the flora and fauna of the area, and photographed the Waldenburg (Wałbrzych) and Pless (Pszczyna) regions, as well as the many places that he visited during his travels around Europe. As a loving husband and father, he presented tender images of his wife and sons. He also was glad to take pictures of the Hochbergs’ children, who happily spent their time with the Hardouins; and to document manor life with portraits of nannies, butlers, cooks, guards, foresters, teachers, stable grooms, coachmen, outriders, gardeners, security officers, farmers and managers... Thanks to this testimony it is easier to understand the organic complexity of the great castle during the time of the last Hochbergs,”

The exhibition has been planned since last year, when the then-Chairman of Książ Castle, the Chairman of the Princess Daisy Foundation and a Radio-Wrocław reporter made their way to Canada. In this distant country they found a huge part of the annals not only of Książ, but also of Pszczyna,  and photographs of Kraków, the Karkonosze Mountains, and even Nice, France and Rome, Italy. By a miracle, the photographs had been preserved in the family collection of Louis Hardouin’s granddaughter, Jean Wessel, who has made this remarkable inheritance from her grandfather available to Wałbrzych.

Among the photographs, numbering over 1,500, about 200 have been chosen for a permanent exhibition in Princess Daisy’s Apartments (the rooms on the second floor, north side), under the title, “A Gourmet’s View of Książ”. As an extra treat for exhibition visitors, six stereoscope stations will provide for a three-dimensional view of certain pictures. In view of the variety of subjects that the photographs illustrate, the exhibition has been divided into three parts:

Room I – “Castle, Grounds, Nature” (Ksiąz and its natural surroundings)

Room II (Daisy’s former bedroom) – “The Hochbergs and Their Court” (the daily life of the Prince’s family, and of the Castle staff)

Room III – “The Hardouin Family Album” (the lives of the photographer, and those close to him). This exhibition is enriched by displays of the lines of poetry that Louis wrote to his wife while, suspected of spying for his native France during World War I, the chef was interned in a camp in Holzminden. In the corridor leading to Daisy’s Apartments, there will be a modern arrangement of a biography of the Princess, the Castle’s last mistress.

To accompany the exhibition, an album has been prepared, containing numerous photographs with captions and descriptions; interesting essays on the subject of Louis Hardouin, including his role in Ksiaż’s history; and the story of how these priceless photographs were recovered.

Thanks to this exhibition, a time capsule of the first decades of the last century, the Castle itself will become again what it was in the Hochbergs’ times. With the opening of the exhibition begins a new era in the Castle’s history: one where its photographic documentation is as rich as that of any historic site in Poland.

We are pleased to welcome visitors as of February 14, 2017 – a historic date!

Admission to “A Gourmet’s View of Książ” is included in the price of a ticket to visit the Castle (no supplementary ticket is required). Check price list [here]
Check the castle opening hours [here] 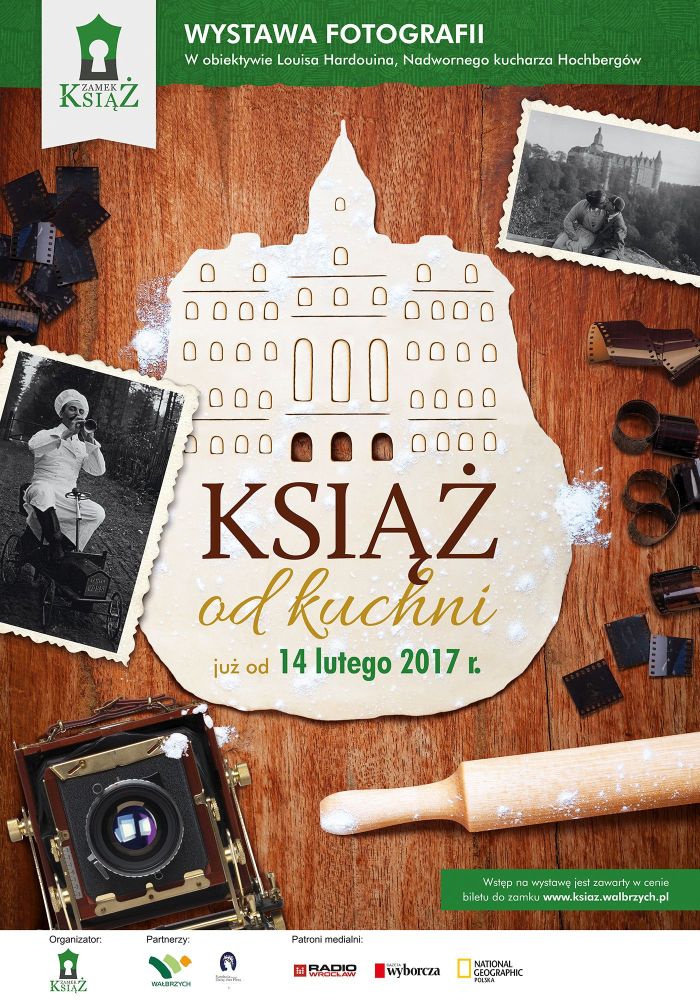