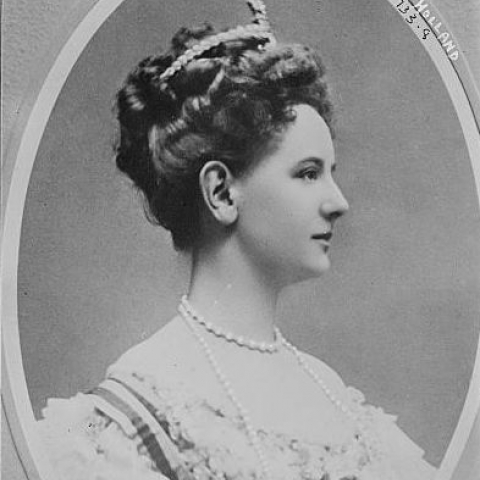 1935 - Wilhelmina, Queen of the Netherlands

Queen of the Netherlands from 1890 to1948, she later abdicated but continued to be Princess of the Netherlands. Wilhelmina, daughter of Wilhelm III of the Netherlands, was not at first a candidate for the throne, but when her father died, surviving her brother, she was the only person with a claim to the crown. She was barely 10 years old at the time. In the end, history has judged her as a great queen, respected by leaders throughout the world and loved by her people. In spite of the Netherlands’ surrender to Hitler’s armies, she continued to represent the Dutch government while taking refuge in the United Kingdom; her anti-Nazi radio broadcasts quickly established her as a symbol of the struggle against the occupation. Having received the Polish Order of the White Eagle in 1923, she was fortunate to visit Książ before the turmoil of the war, and thus to admire the castle in all its splendour and beauty.