The Honorary Courtyard is the most distinctive area in the front of the castle, helping to create an impressive castle entrance. It is surrounded by stone open-work ballustrades, in which the lantern sculptures, mythological figures and  allegories – the work of the Dresden master A.B. Hoffman -- stand majestically. The road leading to the courtyard crosses a stone bridge, over the so-called dry moat, protected by lions with shields displaying coats of arms. Guests are greeted by the figures of the Greek deities Artemis and Apollo.

The courtyard consists of an oval lawn surrounded by a drive which is most often used for promotional purposes, such as advertising products or services (for example, automobiles) that sponsors and event organizers wish to present to guests making their way to the castle. Książ’s superb scenery and illumination also provide for spring banquets, feasts with a historical theme and other outdoor parties.

In the courtyard area, events have been organized such as orchestra performances and other concerts, historical re-enactments, exhibitions of classic vehicles, the International Carriage Driving Competition, and a performance of the opera Carmina Burana.

In history: The courtyard owes its present appearance to what has been called the Baroque reconstruction of the castle in the years 1722 to 1732. The Hochbergs, one of the seven most powerful dynasties of Europe and the hosts of many of the continent’s crowned heads, took it upon themselves to create an aristocratic residence, including an impressive castle entrance. It comes as no surprise that they chose the enchanted castle of Książ as their seat of government. 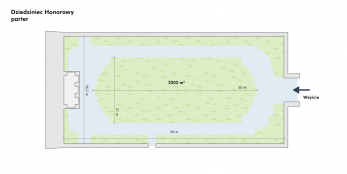