Origin: Under cultivation at the Palm House

This is the largest agave species. The leaves are fleshy, fibrous, and very stiff, ending in a sharp spike, and have prickly edges. Gathered  in a rosette, the leaves have adapted so that they can collect moisture during a time of drought. They have a strong waxy coating, accounting for their bluish or gray-green colouring. They reach a length of 1 to 2.3 metres, a width of 12 – 30 cm., and a thickness of up to 8 cm. The young leaves are vertical, while the older leaves wind themselves into an S-shape.  Scaly leaves form on the inflorescence.  The stem is short and fleshy; when the plant flowers, it lengthens, bringing the inflorescence to a height of 10 to 14 m. The agave blooms only once in its life, then dies. When it flowers, the stem grows from the centre of the leaf rosette, crowned by an inflorescence consisting of thousands of yellow, six-part, tubular, sweet-smelling flowers. The flowers grow up to 10 cm. in length. After it flowers, seeds pour from its boll and the plant dies. Apart from these seeds, it usually leaves behind a number of smaller, younger rosettes, which have grown at the base of the plant.

The American agave has undergone a number of adaptations. It has been cultivated throughout the world as a decorative and potted plant. Its juice contains vitamins, organic acids and minerals. Its leaf wraps have been used to sooth rheumatic pain, and the extracted juice is used in treating food poisoning. The alcoholic liqueur produced from agave is a mild laxative, also used in cases of indigestion and flatulence, and as alternative treatments for jaundice and dysentery. 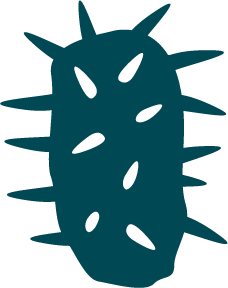