Książ Castle has recovered yet another piece of its history! The National Museum in Wrocław has given us a valuable item, marking Princess Daisy’s first arrival at Książ, which visitors may admire. 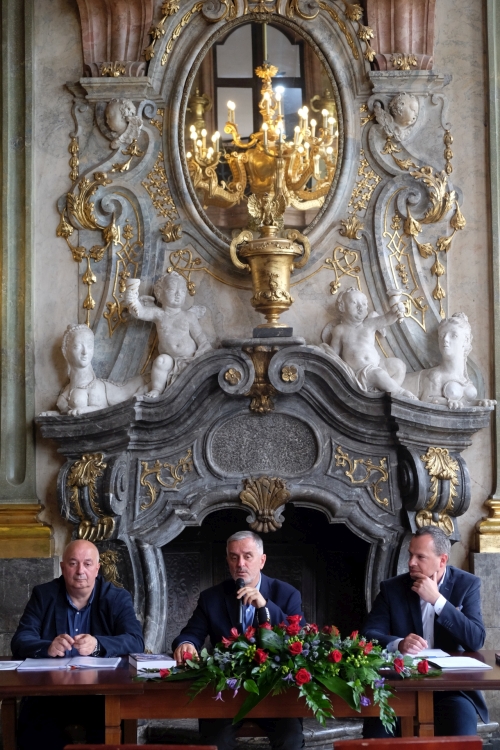 Second anniversary of the opening of the

The National Museum in Wrocław has deposited at Książ Castle in Wałbrzych one of the oldest and most valuable souvenirs of Princess Daisy’s time at Książ. This marks a new stage of the two institutions’ co-operative efforts, which began two years ago.

Two years ago, on July 11, 2015, the “Metamorphoses of Książ Castle” exhibition, prepared by the National Museum in Wrocław, opened at Książ Castle. Two sculptures and 38 paintings from the museum collection were displayed, including ten canvasses from the former Hochberg family collection, four Baroque paintings of members of various branches of this dynasty, and other works selected to decorate the Castle interior. Since the opening, over half a million people have viewed the exhibition. This event, unprecedented in Poland, was possible thanks to the common efforts of Krzystof Urbański, Chairman of Książ Castle in Wałbrzych from 2011 to 2016, and Professor Piotr Oszczanowski, director of the National Museum in Wrocław.

On the first anniversary of the exhibition’s opening, in July 2016, the National Museum in Wrocław made Wilhelm von Lindenschmit’s painting, “Entry of Alaric into Rome”, available to Książ Castle. It was the painting’s first post-World-War-II presentation, made possible by previous conservation work sponsored by the KGHM Polska Miedź Foundation.

In the same year, on October 1 and 2, the National Museum, Książ Castle and the Daisy von Pless Foundation organized an academic conference titled “Pamiętajmy o ogradach” (Let us remember our gardens), devoted to the Książ Landscape Park and the Castle gardens. Now the time has come for the National Museum in Wrocław and Książ Castle to celebrate the second anniversary of their common efforts. To mark the occasion, Książ: Pamiętajmy o ogradach, a book written by the curator of the “Metamorphoses of Książ Castle” exhibition, Dr. Beata Lejman, will be launched.

The event will culminate in the presentation, by the National Museum in Wrocław, of the oldest souvenir, remarkably valuable, of Princess Daisy’s time in Książ Castle.

“This truly precious – indeed, priceless -- souvenir will enrich the museum displays of Książ Castle,” says Professor Piotr Oszczanowski, director of the National Museum in Wrocław. ”This splendid work, which first welcomed Princess Daisy to the Castle, was completed in 1892 by the Wałbrzych painter Johannes Tetzelt (the author of the miniatures that decorate the diploma) and the renowned Wrocław goldsmith Emil Sommé (creator of the elaborate frames with applications of silver and a decorative monogram) was considered lost, until now. And this is something like the proverbial relic: this gift, presented to the newlyweds to their subjects, marks the beginning of the story of Princess Daisy in Książ. There can be no doubt that for the Princess it was a moving occasion, full of hope, when she first received this diploma and held it in her hands. Today, this memento returns to Książ.

The princely couple exchanged their sacramental vows on December 8, 1891 in St. Margaret’s Church, Westminster, and then set out on a honeymoon where they would visit, among other places, Paris, London and North Africa. The newlyweds arrived in Książ on July 3, 1892, where they received the work with this welcoming address: “For His Highness, the Prince of Pless, Hans Heinrich XV, Count Hochberg- Fürstenstein and for her Highness, Princess of Pless, Mary, Countess Hochberg- Fürstenstein, in commemoration of the presence of this nobly born couple in Książ, with our deepest respect. The Administration of the Free Domain of Fürstenstein state and the Krucz-Ciszkowa Estate.”

The work that contains this address may be viewed in the room where the “Metamorphosis of Książ Castle” exhibition begins; admission is included with a ticket for a day visit to Książ Castle.

Piotr Oszczanowski, director of the National Museum in Wrocław:
– Today, the National Museum in Wrocław and Książ Castle will have worked together for two years, and we do not hide our satisfaction in saying that our efforts have been rewarded. We have succeeded – and this thanks to many people from both institutions, and the continual support of the Mayor of Wałbrzych, Dr. Roman Szełemej – in carrying out three important projects. We organized here the exceptional “Metamorphoses of Książ Castle” exhibition; we have brought back to life, through very exacting restoration work, the remarkable painting of Alaric entering Rome; and finally, we also organized together the impressive academic conference, “Pamiętajmy o ogrodach” (Let us remember the gardens). In bringing these projects to fruition, Książ Castle has shown its readiness to fulfil its mission as a museum, and is capable of working together to fulfil all of a museum’s essential, and yet exceptionally ambitious roles: to exhibit, to conserve and to foster academic work.”

Rafał Wiernicki, Chairman of Książ Castle in Wałbrzych, sums up the work that the Castle has accomplished up to now with the National Museum in Wrocław:
- “The project to bring the Museum to the Castle’ project, which we have been carrying out for two years, continues to be unprecedented in Poland, and is changing the public perception of Książ as an institution open to high culture. Thanks to those who have been so involved in this effort – especially Professor Piotr Oszczanowski, who as director of the National Museum in Wrocław piloted the project from the beginning, and the curator, Dr. Beata Lejman, who continually supervised it, over half a million people have viewed the “Metamorphoses of Książ Castle”. After this year this number will have risen to a million. This is a wonderful promotional achievement for the museum world, and at the same time a measure of the potential of such exhibition venues as Książ Castle. There are great plans for developing this project, so that the collections of the National Museum in Wrocław may enrich the experience that Książ Castle offers to its visitors. For their steadfast effort, I thank those I have mentioned; I also thank the Mayor of Wałbrzych, Dr. Roman Szełemej, for his deep faith in the possibility of establishing a branch of the Museum in Książ. My thanks also go to my predecessor, Krzysztof Urbański, for his determination and for preparing this historic event. I thank all those at Książ Castle and the National Museum in Wrocław for their commitment to this endeavour. I take great personal satisfaction in this project, a successful synergy of skill and promotion. Our aim has been clear from the beginning: that the Museum may remain permanently in the Castle.